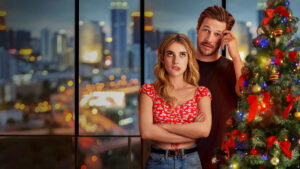 Emma Roberts and Luke Bracey star as Sloane and Jackson, both hate holidays, but both are in need of plus-ones!  So their solution?  To be each other’s dates for each holiday celebration throughout the course of one year!  Take a look at my interviews with the stars as they talk about their interest in the film, their characters, and what’s a backdoor?  “Holidate” starts streaming on Netflix on October 28th.

Kristin Chenoweth star as Sloane’s Aunt Susan while Jessica Capshaw is the older sister Abby.  Andrew Bachelor aka King Bach is the ladies friend of Jackson.  Take a look at our interview as they talk about their characters and interest in starring in the film.