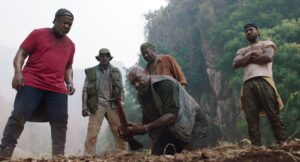 Spike Lee’s “Da 5 Bloods” was the big winner at the 2020 National Board of Review (NBR) awards taking home the best picture and directing trophies.  Best original screenplay was given to “Minari” while “News of the World” won the adapted screenplay award.  In the acting categories, Riz Ahmed won Best Actor for “Sound of Metal” while Carrey Mulligan was named Best Actress.  Paul Raci, also from “Sound of Metal” won Best Supporting Actor while the fantastic Youn Yuh-jung for “Minari” claimed the Best Supporting Actress award.

While I agree with most of their choices, why is there no love for Brazil’s “Bacurau?”  Also, I still believe that “Wolfwalkers” is infinitely better than “Soul” and I love both movies!

Here are the winners of the 2020 National Board of Review Awards:

NBR Freedom of Expression Award: ONE NIGHT IN MIAMI

All In: The Fight for Democracy
Boys State
Dick Johnson is Dead
Miss Americana
The Truffle Hunters